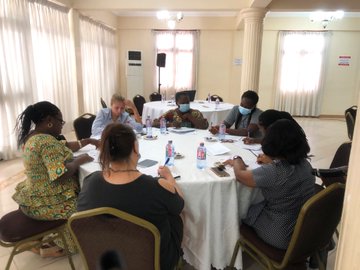 Opposition or Minority parties are integral to Parliaments and contribute greatly to the outputs of the House as a whole.  Opposition parties do not only represent an alternative government but also, they are responsible for challenging the policies of the government and producing different policies where appropriate.

The African Centre for Parliamentary Affairs held a one-week capacity building training for a six-member delegation from the Parliament of Uganda, led by the Leader of Opposition in parliament. The training workshop aimed at improving the capacity of the Opposition to hold government to account; explore innovative approaches to how Opposition can be a credible alternative to the ruling government; and explore effective ways through Opposition parties could work with civil society and the media to ensure good governance.

The training modules explored a number of issues including the theory and practice of being a parliamentarian, internal governance of Opposition Parties, and how to be a credible government-in-waiting. A very important aspect of the training was the opportunity availed participants to learn from the experience of their counterparts in Ghana and other key actors in the governance sector. Participants had sessions with a representative from one of the influential Civil Society Organizations (CSOs) and one from a leading media organization in the Ghana. Participants also had interactive sessions with the Majority Leader, Minority Leader and the Minority Chief Whip of the Parliament of Ghana. Aside experiences from the Ghana Parliament, the delegation also met and interacted with Executives of the two major political parties in Ghana namely the New Patriotic Party (the party currently in government) and the National Democratic Congress.  These two parties have been in government and opposition at different periods in the history of Ghana thus they had a lot to share with the Ugandan delegation.

Apart from the key lessons learned by participants as part of the lecture and interactive sessions, one of the major outcomes of this engagement was the relationship that has been established between the Ugandan Opposition and the political parties in Ghana.  This is expected to lead to further collaborations and discussions towards building upon the democratic foundations of both countries.

Participants were very appreciative of the facilitation and delivery of the training as well as the hospitality accorded them during their stay in Ghana.