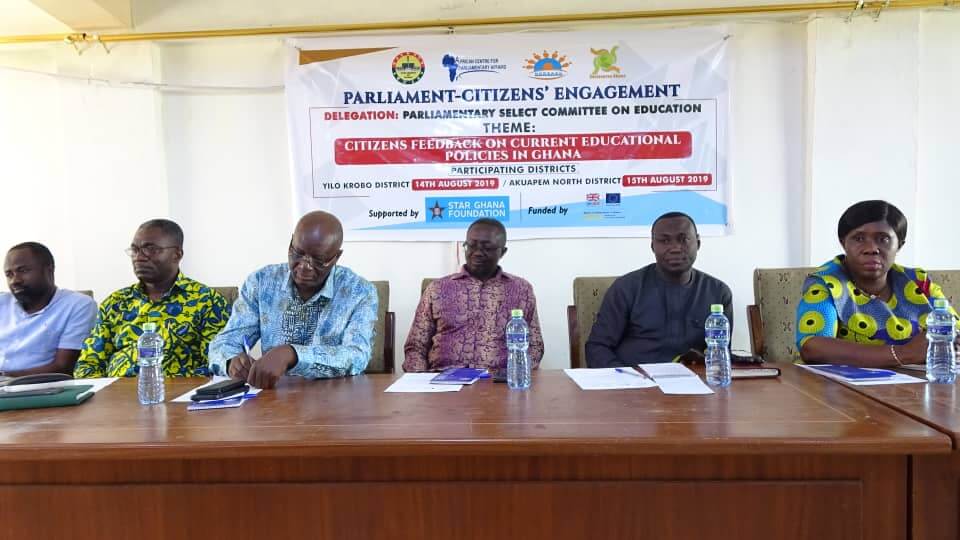 Dialogues for Change: MPs and Citizens Working Together for Inclusive Development

On July 17 2018, ACEPA and its partners (Socioserve and NORSAAC) held an Inception meeting with parliament to Launch the Dialogues for Change project funded by STAR-Ghana.

The Dialogues for Change Project seeks to achieve a Responsive citizen representation that meets the needs and aspirations of all especially the vulnerable and socially excluded in society. The three-year project took off in September 2017 and will end on September 2020.

The project is being implemented in the Northern and Eastern regions of Ghana. The districts involved are Abuakwa North, Akuapem North, Yilo Krobo and Asuogyaman districts in the Eastern Region and Tamale, Gushegu, Sagnarigu and Tolon dictricts in the Northern Region. So far, the project team have sensitized about 400 citizens and CSOs in both Regions on the Role of Members of Parliament and how to engage them.

The program was organized to introduce the project to parliamentary stakeholders as well as formally mark the start of the project with the Parliament of Ghana. The meeting was also used to present the Baseline Survey findings on Parliament-Citizen Engagement to the parliamentary target group (the Committees of Health and Education, as well MPs from target constituencies), and sensitize the MPs on the importance and relevance of citizens’ engagement. It was also an opportunity to brief the Media and get their commitment to follow up and report on the project as well as add voice to the campaign.

The meeting was attended by MPs from target Constituencies and members of the two target Committees. Representatives from the various media houses were also present as well as staffs of Socio-serve-Ghana, NORSAAC and ACEPA.

ACEPA on behalf of its partners and STAR-Ghana, expressed their hope that through the project the quality of Representation in Ghana Parliament will improve, and effective representation of citizens will result in improved livelihoods and holistic development of our societies.

Mr. Tuinese Edward Amuzu, a Consultant who conducted the baseline survey in November 2017 to ascertain the state of citizens’ engagement with Members of Parliament, and how their views are captured in policy actions presented the findings. According to the findings a couple of reasons were mentioned as what hampers engagement with Members of Parliament. According to him, there seem to be a big gulf between parliament and the vulnerable groups, especially in the Northern Region, and that vulnerable groups need help(education) to be able to engage duty bearers.

The Senior Governance Adviser of ACEPA, Mr. Issifu Lampo also gave a presentation on the need for Parliamentary Outreach and Citizens’ Engagement. He explained that parliament is not just a decision-making body but also serves as a link between the electorates and the elective government and have an important role to play in articulating the concerns of the people they represent, and advocating for changes that will improve their lives. Thus, the need for parliamentary outreach is very important to both citizens and duty bearers (Members of Parliament).

Following the briefing of the project the Members of Parliament commended the project and its implementing partners, and recommended that citizens sensitization on the work of parliament should be extended to other parts of the country since majority of Ghanaians are not aware of the actual role of parliament ant its members.

ACEPA and its partners secured commitments from the MPs and the committees to support the project. To this end, MPs, Committees and the Media have agreed to having further engagements with the project.

MPs and the Media were appreciative of the focus of the project and expressed interest in playing their roles to ensure that the objectives can be achieved.